Reform / Re form: (O.E.D.) To convert into another and better form – To form for a second time, form over again.

This meaning; implying both material conversion and ideological transformation formed the starting point for ReForm; a collaborative arts project curated by Moving Houses.

ReForm involves the pairing of eight established artists with eight recent graduates (selected from art and design graduation shows in 1998). The selection was based on the content of each artist’s work rather than on the discipline or media. Each pair of artists (who had never met before), were asked to work in collaboration to produce a piece of work.

As curators we were primarily concerned with selecting and matching the artists and once the collaborations had started, we relinquished control. The resulting work which is shown in this site and in a published catalogue is the exciting conclusion of sixteen artists taking a radically different and open minded approach to creating work.

As the collaborations progressed it became clear to us that ReForm is not just about the content of the work, but about the way attitudes and ideas can be reformed within ones own practice.
Rachael Matthews, Roz Mortimer, Claire Robins

A printed catalogue for this exhibition is available: 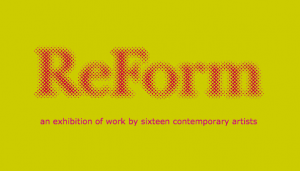 A printed catalogue for this exhibition is available: